Iceland pulled off one of the biggest shocks in international soccer history Monday by beating England 2-1 at the Euro 2016 tournament. Here are five reasons why the Nordic nation should be your new favorite team.

1. Iceland is the ultimate underdog

Iceland’s population of just 330,000 means the entire country has fewer people than the city of New Orleans.

It is the smallest nation ever to qualify for a major soccer tournament. The minnow of Euro 2016 has a population just one-400th of Russia’s and almost one-200th of England’s.

Around 27,000 Icelanders bought tickets for the championships in France — about 8 percent of the country’s population. If the same proportion of U.S. citizens bought tickets for a foreign sporting event, it would mean 25 million people — almost every man, woman and child in Texas — going along.

That’s a lot of flights and hotels.

“It’s like having your family at the game,” Iceland defender Kari Árnason said. “I know probably 50 percent of the crowd — or at least recognize them!”

According to soccer body UEFA, around half the country is estimated to have watched the country’s dramatic 2-1 win over Austria — a 99.9 percent TV audience share for that evening.

Before Iceland, Slovenia were the smallest nation to qualify for the Euros, with its population of 2 million. With 1.2 million residents, Trinidad and Tobago is the smallest World Cup team. 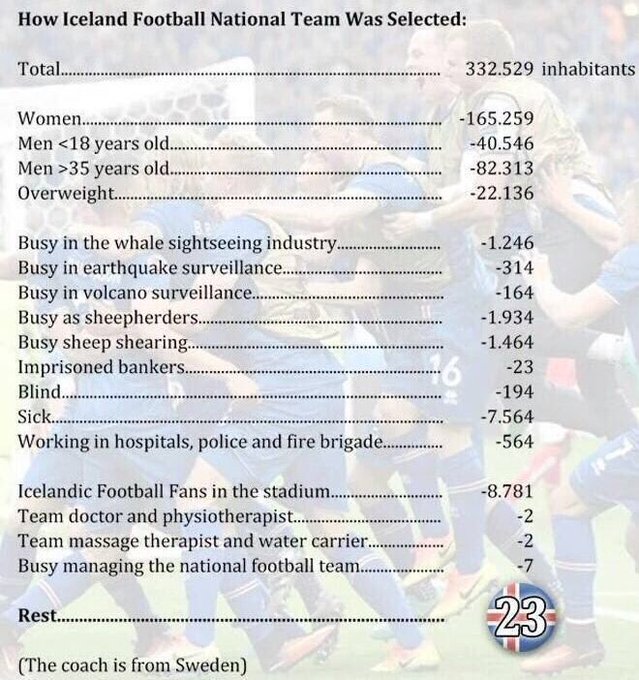 2. Its co-coach is a part-time dentist

Helping deliver this kick in the teeth was Heimir Hallgrimsson, who has kept up his job as a dentist despite being the assistant manager of the Icelandic national team.

Hallgrimsson will take over after head coach Lars Lagerback, a veteran Swede who has managed teams since the 1970s, steps down at the end of the tournament.

This is far from a group of amateurs, though. Playmaker Gylfi Sigurdsson is arguably the star man for Premier League side Swansea. And while Eidur Gudjohnsen has adopted more of an elder-statesman influence in the Iceland dressing room, the 37-year-old striker has won trophies at Chelsea and Barcelona during his 23-year career.

Iceland itself has no professional league and its icy climate is too cold to sustain outdoor pitches all year round. Instead, a part-time league has blossomed on indoor and artificial pitches, with most of the players keeping up their day jobs outside soccer.

3. Its commentators know how to celebrate victory

Gudmundur Benediktsson’s reaction to Iceland’s victory over Austria was dubbed one of the most memorable pieces of soccer commentary and went viral soon after the result.

Benediktsson was also the assistant manager of struggling Icelandic team KR Reykjavik, until the club fired him four days after he achieved internet fame. No matter. He was back in the commentator’s chair for the England game and reacted with an appropriate meltdown after Kolbeinn Sigthorsson scored the winning goal…

… and when the referee blew the final whistle, sending Iceland through to a quarter-final tie with hosts and pre-tournament favorites France.

“Iceland is going to play France on Sunday. France Iceland!” he said, according to a translation by the Guardian. “You can go home. You can go out of Europe. You can go wherever the hell you want,” he added, appearing to reference the country’s recent Brexit vote. “England 1 Iceland 2 is the closing score here in Nice. And the fairy tale continues.”

As has become customary after Iceland’s games, on Monday the players led their fans in a daunting and freakishly well-organized “Viking chant.”

In a tournament marred by hooliganism by Russian and English fans, the biggest group of Icelanders ever to gather outside their country have brought nothing by joy to the tournament.

FROM JUNE 11: Fans Riot Ahead Of England vs. Russia Soccer Match 0:46

5. The country needed a boost

Euro 2016 has allowed Icelanders to rediscover their sense of Þjóðernishyggja (meaning “nationmindedness”), according to TIME, after 2008’s financial crisis saw all three of the country’s major banks default and the Panama Papers toppled its prime minister.

Prime Minister Sigmundur David Gunnlaugsson resigned after the leak showed his wife owned an offshore firm connected to the country’s collapsed banks. His fall came after protests in which people threw eggs and bananas at the country’s parliament — labeling the country a “banana republic.” Many people already held a (perhaps unfair) grudge against Iceland, after the eruption of its Eyjafjallajökull volcano shut down air travel across Western Europe for six days in April 2010.

The country received a PR boon last year, however, after around 12,000 Icelanders — 4 percent of its population — joined a Facebook page offering to take in Syrian refugees into their homes.